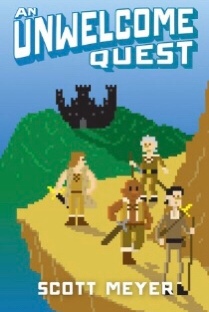 Ever since Martin Banks and his fellow computer geeks discovered that reality is just a computer program to be happily hacked, they’ve been jaunting back and forth through time, posing as medieval wizards and having the epic adventures that other nerds can only dream of having. But even in their wildest fantasies, they never expected to end up at the mercy of the former apprentice whom they sent to prison for gross misuse of magic and all-around evil behavior.

Who knew that the vengeful Todd would escape, then conjure a computer game packed with wolves, wenches, wastelands, and assorted harrowing hazards—and trap his hapless former friends inside it? Stripped of their magic powers, the would-be wizards must brave terrifying dangers, technical glitches, and one another’s company if they want to see Medieval England—and their favorite sci-fi movies on VHS—ever again. Can our heroes survive this magical mystery torture? Or will it only lead them and their pointy hats into more peril?

This was the third instalment in the Magic 2.0 Series, a series that I am aiming to finish in 2022.I was a little apprehensive about returning to this series as I didn’t overly enjoy the second book. It just fell a little bit flat for me so I was really worried that the series was going to continue going in that direction. Well worry not! This book was such a welcome return to the fun and silliness of the first book. I am so happy that the series is bringing me more of what I loved when i started the series! I gave this book 4 Stars on Goodreads and I’m so excited to continue with the series.

The majority of this book took place in a world within the computer programmed reality which made me laugh as it reminded me of the bird within a bird within a bird that I saw in the Christmas food brochures. There’s just something about a world inside another world that is inside our world that took a bit of time to get my brain around but I was loving it. The wizards were swept off to another world which was very Dungeons & Dragons (which I loved playing with my friends in the before times. I was a Drow after my Air Genasi fell victim to a dragon. I like playing characters that remind me of Warhammer figures that I have). This new world was also computer programmed but so full of glitches and short cuts which made for some moments of hilarity. I really enjoy reading fantasy and popping off to a magical world and this book really did feel magical!

I really enjoyed the quest element of this novel. I really enjoyed the story of the wizards going off to try to find a way to freedom and the rest of the gang coming in to save them. I really could picture this new world and enjoyed the wolves that when destroyed would multiply where they fell. This also made for some entertaining moments.

In the last book, the book tried to flip sexism and was set in a matriarchy but it just felt like the moments that poked fun at sexism and stereotypes ended up being sexist and just annoyed me. This book seemed to have learned from those mistakes and any sexism or misogyny was called out. The character in question came from a different time which was his excuse but he was told that his attitude towards women wasn’t ok and he did grow which I did enjoy.

This book was just jam packed with nostalgia! The part where the wizards were all together for video night brought back so many memories of my sister and I going to Blockbusters or Spar to rent a video and making a whole event of watching the film. I loved the idea of these wizards, with so many powers, just settling down at the weekend for a movie marathon.

I’ve read some rather emotionally draining books lately and was very much in need of something light, something fun, something whimsical. This book delivered! This book was a very quick and light read. It was super full of silliness, laughs and was just a really enjoyable read. I felt very happy reading this, it made me laugh so much.

I’m so glad that I read this book and I’m really looking forward to finding out what happens next in the series. While this book was part 3 in a series, I really feel like each of the books work well as standalone novels, or at least the ones that I’ve read so far would work as standalones. If you are looking for a silly fantasy adventure novel, this could be the series for you.

1 thought on “An Unwelcome Quest”