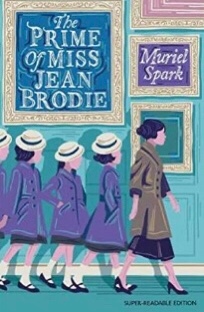 At the staid Marcia Blaine School for Girls in Edinburgh, Scotland, teacher extraordinaire Miss Jean Brodie is unmistakably, and outspokenly, in her prime. She is passionate in the application of her unorthodox teaching methods and strives to bring out the best in each one of her students. Determined to instill in them independence, passion, and ambition, Miss Brodie advises them, “Safety does not come first. Goodness, Truth, and Beauty come first. Follow me.” And they do–but one of them will betray her

I finally got around to reading this Scottish Classic! I had heard a lot about this book when I was in high school as one of the other English classes was studying it but after that point, I must admit that I never thought about it again for years and years. I suppose I was too scarred from having to read Sunset Song that I felt a bit wary about reading another High School approved Scottish Classic. I read a different book a few months ago that referenced this book so heavily that I couldn’t stop thinking about giving it a read. I’m so happy that I did because this book was so enjoyable and I ended up giving it 4 stars!

The format of this book was really unusual as during the chapter there were multiple jumps through time. An event or conversation would happen and the next paragraph would be a jump in time to describe the repercussions of the event/conversation. I really liked this format as it kept the story flowing. I’m so used to books that wait until the next chapter to change the setting but I would be keen to read more books in this format.

I think I was expecting Miss Jean Brodie to be a sort of Dead Poets’ Society sort of teacher but she really wasn’t. Miss Jean Brodie was in the prime of her life and wasn’t scared to talk about it. I felt so bad for the pupils who were having their academic futures impacted by their teacher who used them as her confidantes. Miss Brodie had her favourites, The Brodie Set, and they would socialise and have preferential treatment in class. Miss Brodie really had a lot of passion and opinions and was very much trying to mould her favourites into almost little versions of her. To make them believe her beliefs, sometimes to their detriment. I think that this book would be a brilliant read for any age, I know that young me would have enjoyed the special relationship between The Brodie Set as well as their relationship with their teacher. Adult me enjoyed this also but noticed that the relationship was very inappropriate, child me probably wouldn’t have.

The entire book seemed to be told from the point of view of an omnipotent narrator. I thought that this worked really well. There were quite a few plots happening that the book sort of needed either an omnipotent narrator or multiple points of view as otherwise it would be difficult to include so many things that were important.

This book was set in Edinburgh and in the really nice part of Edinburgh. Edinburgh is such a lovely city but there’s so much more to it than the fancy schools and beautiful buildings. This book actually included references to the differences between Old and New Town as it included some of the poverty affected occupants of Edinburgh. This was brought in as sort of raising awareness to The Brodie Set of poverty and just how lucky they were.

Miss Brodie made a very big mistake which had terrible results. They were betrayed by one of The Brodie Set and the book kept me guessing with regards to who it was that betrayed her. She suspected them all and it was quite sad in parts. At the same time it showed how much her lessons had impacted the girls as they told the truth which she had told them that they must always do.

I enjoyed this book a great deal and would definitely read more books by Muriel Spark. I’m not sure which book I will pick next but I do know that there will be a next read.

1 thought on “The Prime of Miss Jean Brodie”