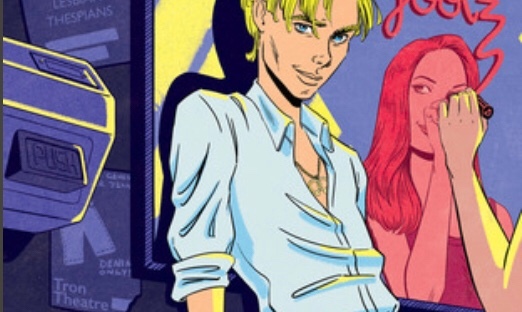 Enter Vicky Romeo: lover, actor, bullshitter. Romeo is a slick, serial heartbreaker who is determined to land the lead in an all-women rendition of The Importance of Being Earnest. She thinks she has life figured out, but then she falls in love…

Enter Julie Turner aka Joolz: sexy, sarcastic, femme fatale and a cheerleader to boot. Stamping on hearts and traditional stereotypes she plays girls like Vicky Romeo at their own game.

Set in Glasgow in 2001, our heroines and their cohorts take on the world one incredibly gay step at a time.

I picked this book up when I was in Category Is Books, in Glasgow, at the start of the month. I’m still basking in the pride of reading a book in the month that I bought it. This has very much been the month for it but I have no faith in my ability to keep that up. I absolutely adored this book, I gave it 4 stars on Goodreads but it would have been 4.5 if Goodreads allowed halves.

This book was prefaced by a statement from the author who said that the book was written in 2001 which is the year that it was set. The attitudes and terminology used are that of the scene at the time and the book would have been totally different were it written today. I appreciated this because otherwise I’d have probably been a bit put off by some of the attitudes. As this book was about a community that I wasn’t part of in 2001, I’m taking the author’s word.

At first I didn’t really like either of the main characters. I thought that Vicky Romeo was arrogant and reminded me so much of an old flatmate who used to boast about never being turned down by a romantic partner…and then one time they were and they were a wreck as they’d never faced rejection. However as the book went on, I could see through their shell and she was a sweetheart who just wanted to love and be loved and really wasn’t as confident as they appeared. Joolz annoyed me at first as they seemed to be playing games with Vicky despite saying they weren’t their type. There was a great deal of her being hot one moment and blanking her the next. Although I had to remind myself that these characters were 20/21 .

I really liked the strong parental role models in this book. I loved Mama Romeo and Sam! There were a lot of side characters that I did get a bit confused with. I enjoyed Kat but I didn’t like the other flatmate.

There were a few twists and turns in this book that I just did not see coming. They were very well done and really helped to make the characters feel real. I feel like I could have been friends with these people, I’d have gone to see their play!

I absolutely loved the setting of 2001 Glasgow. I loved the references to Nokia phones and a whole bunch of scenes in an Internet cafe. It was very nostalgic in places.

This was my second book by Ely Percy and it won’t be my last. I’m adding them to my autobuy author list! I’m so glad that I didn’t wait too long to read this book because I really did enjoy it.

1 thought on “Vicky Romeo Plus Joolz”